Blessed with more than 1300km of gorgeous palm-fringed golden-sand beaches and a compelling mix of ancient cities, palaces and Hindu and Buddhist temples scattered amid emerald plains and lush jungle-clad mountains, Sri Lanka is a unique honeymoon destination and perfect for adventurous couples.

Sunny skies abound along the west and south coast from October to April, while the east coast beaches are best from May to September.

Discover a wide expanse of golden sand that sweeps in a long gentle crescent between the warm aquamarine waters of the Indian Ocean and the blue Bentota River, set just behind the palm-fringed beach.

Sunbathe on the smooth golden sand, swim in the ocean or try sailing, windsurfing or waterskiing.

Stay in comfort at one of the many beachside resorts including the historical five-star Bentota Beach Hotel or the luxurious Taj Exotica Bentota, which nestles in a manicured beachfront garden.

Explore the Bentota River and lagoon by boat, looking out for water monitors and crocodiles among the tiny islands and mangrove forests as herons, cormorants and colourful kingfishers soar overhead.

Bentota Beach is located 62km south of Colombo on the island’s southwest coast.

This popular golden-sand beach rests beneath a soaring headland that is home to the luxurious Mount Lavinia Hotel – the former residence of the colonial Governor General.

Ambalangoda is perfect for a day trip and the nearby town is famous as the home of devil dancing and mask making, both important aspects of Sri Lankan culture.

These colourful hand-carved and hand-painted masks are worn during traditional dance dramas, which you can watch at the local Bandu Wijesooriya School of Dancing.

Go swimming, snorkelling and diving or admire the underwater coral gardens in a glass-bottomed boat. Surf the beach break, sunbathe or swim from the pristine golden-sand beach and relax in comfort at either the Hotel Coral Garden or the Hotel Reefcomber.

Relax on the beach, go swimming, snorkelling and diving or hike up to the hilltop stupa (Buddhist temple) located behind the beach for panoramic views.

A short stroll to the western end of the beach brings you to Rumassala Hill, a legendary rocky outcrop that is home to a large collection of medicinal herbs and boisterous macaque monkeys.

Unawatuna is located around 5km south of Galle and offers a range of beachside accommodation with several boutique villa-style resorts lining the beach, including the Off Rocks Beach Villa, Thambapanni Retreat and the Thaproban Beach House.

This quiet golden-sand beach lies south of Unawatuna and is renowned as the home of the famous stilt fishermen, one of Sri Lanka's unique beach sights.

Watch as local fishermen cast their nets while balancing on a single pole embedded in the sea bottom.

Relax in comfort at the luxury Mandara Boutique Hotel, one of several resorts that line this popular beach. Or stay on idyllic Taprobane Island just metres off shore and a hideaway for the rich and famous in its private villa.

Swim in the calm, clear waters, surf and snorkel the west end of the bay and stroll along the beach to the rocky headland that separates the beach from the neighbouring fishing harbour.

This wide, 6km-long crescent of golden sand offers safe swimming as well as a wide range of watersport activities including waterskiing, diving and snorkelling, which is especially good around the nearby offshore Pigeon Island.

Nilaveli Beach is located on the east coast just 14km from Trincomalee.

Discover a long expanse of golden sand perfect for swimming and sunbathing, but more famous for surfing. The best time to surf is between May and November.

Arugam is located on the southeast coast of Sri Lanka and offers a number of budget-style guest cottages.

What to do and see in Sri Lanka

Sunbathe, swim, snorkel and surf from an impressive expanse of golden-sand beaches that mainly lines the southern half of the island.

Windsurf at Beruwela Beach and discover world-class diving among the underwater caves and pristine coral reefs of Bentota and Hikkaduwa beaches.

Inland, scramble over the ancient city ruins of Anuradhapura and Polannaruwa; admire the Avukana statue, a large standing statue of the Buddha near Kekirawa (photo); spot leopards, bears and monkeys on an elephant safari through unspoiled rainforest; then hike to Adam’s Peak, Sri Lanka’s holiest mountain.

Examine the sacred tooth relic of the Lord Buddha at Kandy, breathe in the delicious aroma of fresh tea while roaming the Sri Lankan highlands.

Join an impromptu game of cricket on the beach and, for an insight into Sri Lanka’s enthralling culture, watch Kandy’s Esala Perahera procession or Colombo’s spectacular Vel Festival.

Sri Lanka offers a wealth of must-see cultural sightseeing opportunities from UNESCO World Heritage sites to a compelling mix of ancient cities and palaces, along with Hindu and Buddhist temples that sit scattered amid emerald plains and lush jungle-clad mountains.

Discover the sacred city of Anuradhapura, founded in 500 BC then abandoned in 993 AD when the Lankan capital moved to Polonnaruwa.

Once hidden in dense jungle, this splendid site offers an enthralling array of palaces, monasteries and monuments to wander around.

The ancient city sits on the banks of the historic Malvathu Oya, 205km north of Colombo.

Marvel at the monumental ruins, frescoes and enormous statues of Buddha dating back to the 11th and 13th centuries.

Marvel at the huge 12m-long reclining stone Buddha statue carved out of a rock wall at Galyhare, then wander around the Royal Palace and Lankatilaka and Thuparama temples in this remarkable garden city that was created in the 12th century on the shores of Lake Topawewa.

Discover this ancient palace fortress, which sits atop a 370m-high granite peak, through a series of galleries and steep staircases deftly carved into the rock face.

Built during the 5th century and surrounded by the ruins of an extensive garden, Sigiriya is also famous for its ancient frescos, which are reminiscent of India’s famous Ajanta Caves.

Explore the largest and best-preserved cave-temple complex in Sri Lanka, dating back to the 1st century BC.

Stroll through a complex of five caves packed with an exquisite collection of Buddhist murals and statues, including a 14m-long painting of a meditating Buddha.

Explore the cultural capital of Sri Lanka, a sacred Buddhist site and the site of the Temple of the Tooth Relic (the sacred tooth of the Lord Buddha), held within the octagonal Dalada Maligawa – a famous pilgrimage site.

Kandy is Sri Lanka's second largest city, the gateway to the famous tea plantations that lie amid the country’s rolling hill country and the ancient cities of Anuradhapura, Polonnaruwa, Dambulla and Sigiriya.

Explore the massive ramparts of the 36ha Dutch Fort, built in 1663 on a promontory overlooking the town and ocean approaches.

The fort is generally considered to be the best example of a fortified city built by Europeans in South and South-East Asia – a showcase of European architectural styles and south Asian traditions.

Galle is located in the southwest corner of Sri Lanka.

Explore on foot Sri Lanka's last existing tropical rainforest, home to a treasure trove of endemic vegetation, reptiles and mammals, including leopards and the purple-faced langur.

Other non-UNESCO sights to visit include…

Discover the tea capital of Sri Lanka, which sits in the central highlands at an altitude of 1889m, overlooked by Mount Pidurutalagala, the highest peak in Sri Lanka (2524m).

Nuwara Eliya is surrounded by a seemingly endless array of picture-perfect tea plantations.

Relax in a country club-styled hotel, try to spot sambhar and leopard at Horton Plains National Park and hike or bike through the scenic hill country, offering a pleasant change from the tropical coast with an average 10°C year round.

Discover one of the largest herds of captive elephants in the world – presently around 3000 orphaned elephants – located about 80km northeast of Colombo.

Assist during the feeding of baby elephants and take photos of the daily bathing ritual in the nearby river.

Try to spot and photograph some of the 130 different species of birds and animals that inhabit Sri Lanka’s largest park (1259km²), including 35 leopards.

Yala National Park is located 309km south of Colombo on the southeast of the island.

Climb the steep stairway up the mountainside – believed to be the longest in the world – to this legendary 2224m-high holy mountain peak known as Sri Pada, or Adam's Peak.

Once you’ve caught your breath, enjoy spectacular views from the summit and don’t miss the enclosed rocky imprint of a foot on the summit’s pinnacle.

A pilgrimage centre for more than 1000 years, pilgrims believe the footprint was made by either Lord Buddha, the God Shiva, St Thomas or Adam after he was expelled from Eden. Sri Pada is located in the beautiful southern Hill Country.

Follow walking trails through the grassland of this 10,000ha reserve to see native flora and fauna including leopards, sambar, the purple-faced langur, elk, deer, giant squirrel, boar, hare and porcupine.

There is also a variety of migratory and local birds – the Park is home to 95 per cent of the endemic birds of Sri Lanka.

Don’t miss walking to ‘World's End’, a sheer precipice with a 1050m drop. Horton Plains National Park is located at a height of more than 2000m above sea level in the central highlands, around 200km east of Colombo.

Discover Sri Lanka’s highest waterfall, a dramatic 263m-high cascade that plunges down a vertical cliff face into a deep pool.

The waterfall is best appreciated between October and March and is located in a pine forest just 22km from Kalupahana, followed by a short walk.

Find the best deal, compare prices and read what other travellers have to say about hotels in Sri Lanka at TripAdvisor.

Anytime. Sri Lanka is a year-round destination with a tropical climate, high humidity and an average year-round temperature of 27°C (80°F), increasing to a high of 31°C (88°F) in coastal regions.

However, the best time to visit Sri Lanka will probably depend on your travel itinerary. For the west coast, south coast and Hill Country, visit during the dry season from December to March. For the east coast and the ancient cities region, it’s best to visit between April and September.

Sri Lanka has two monsoon seasons, which produce a dry season from November to April on the southwest coast and highlands, and a wet season on the east coast.

Alternatively, April to September is the dry season and the best time to visit the east coast, while the west is wet.

January is the coolest month, especially in the highlands where temperatures may drop by up to 7°C (44°F). May is the hottest month.

Getting to Sri Lanka and around

Sri Lanka (officially the Democratic Socialist Republic of Sri Lanka, and formerly as Ceylon) is an island nation located off the southern tip of India in the Indian Ocean.

The most convenient route to Sri Lanka is by air to Colombo's Bandaranaike International Airport, located around 32km (20mi) north of the city. The beach resort of Bentota is a 90-minute drive away.

Major resorts may meet quests by prior arrangement. Singapore Airways and Emirates fly daily to Colombo from Singapore.

Things to do Resorts Getting there

SAVE $$$ on honeymoon travel deals

Search, compare and book the lowest possible prices on discounted airfares and hotels from our online travel partners. 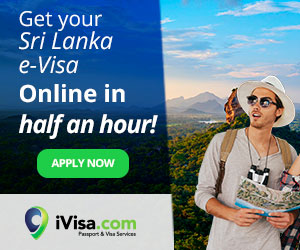